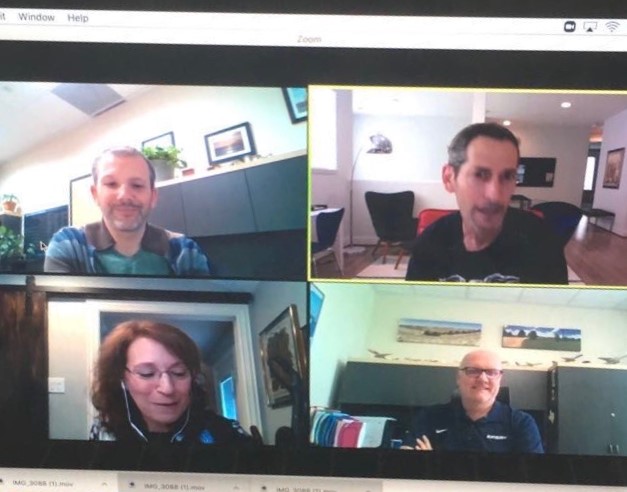 Head of School Stuart Dow, CFO Dave Meyer, Dean of Students Dana Aboulafia, and Director of Technology Josh Blice led an informative discussion on April 22 about senior events such as prom, graduation, and the Poland/Israel trip. Parents and students tuned into Zoom hear about alternatives to these milestone events, which are on hold due to COVID-19.

All four administrators agreed that they would do everything in their power to recreate the occasions that the seniors have been anticipating for the past four years. “I am extremely saddened at the circumstances we are in,” Dow began by saying, “and I would never want to cancel any of the events that are now up in the air.” Although some news that followed was disappointing, there were still plausible alternatives identified in the meeting.

First, the discussion was about prom and what could be done to replicate it. Dow explained that the prom, initially scheduled for April 25, would most likely be  postponed for a later date. “I encourage you and your families to reserve the first weeks in June and August to have a ‘Senior Week’ so that the class of 2020 can be celebrated,” Dow said.

Senior Week would be a week where the seniors could get back some of the highly anticipated events. This includes prom, but also graduation and the senior dinner. “We could also have prom right after the senior dinner at school instead of planning a venue that may or may not be open depending on the virus,” Aboulafia suggested. If schools are still closed by the first weeks of August and June, then it will probably be up to the seniors to create a prom of some sort.

Even though the majority of the year’s remaining key events will be changed or postponed, seniors remain cautiously optimistic. They feel lucky to have a caring administration. “I did like the idea of fitting some of our lost events in during senior week,” senior Peter Berry said.“More than anything else, I realize that there is not much the administration can do about our situation.”

Next, Dow delivered some jarring news about Israel. “The Israel trip is extremely unlikely to happen in May because of Israel’s travel ban and two-week quarantine protocol,” Dow admitted. However, Dow asked parents and students to brainstorm alternative ways to recreate the Israel trip.

For instance, some students proposed the idea of an abbreviated Israel trip, such as a 10-day trip or “birthright” some time later in the year. “I knew and expected Israel not to happen due to what is going on right now,” Berry explained.  “I realize that Emery cannot really do anything about it. I was not completely opposed to some of the ideas Dow expressed, such as doing a 10 day trip to Israel next December.”

Dow and the administration also proposed offering the Israel trip next summer or after winter break next year, depending on when the COVID-19 pandemic ends.

Last, Dow addressed arguably the most important topic of the call, which was graduation. The commencement ceremony typically takes place a few days after seniors return from Israel in June, but with COVID-19 being extremely unpredictable, no one knows whether campus will be safe for graduation on that date. Despite COVID-19, seniors, parents, and the administration were all determined to have a graduation; more so than most of the other topics covered in the call.

“We have no intentions of canceling graduation, and again, we urge you to reserve the first weeks in June and August for graduation as well,” Aboulafia assured everyone.  “We are thinking of an outdoor graduation on Helfman in June or the usual commencement ceremony indoors in the Kosberg Gym.”

The administration’s efforts are clear, but there are some students who would prefer other solutions. “I would be alright with an outdoor graduation. However, if there is a better chance we could do a proper graduation later in the summer, I would probably rather that,” Berry admitted.

Furthermore, there are some concerns regarding weather with the outdoor graduation proposal. “I honestly don’t mind the idea of an outdoor graduation,” senior Maya Zehavi said. “However, my only reservation about it would be the heat, but a socially distant graduation is better than none at all.”

Even though some students were disappointed with the proposals, the Emery difference is clearly still part of student life, even in quarantine. “I really appreciate them making any effort at all, even with the circumstances given,” Berry said.

There have also been some surprises that really brightened up the seniors’ quarantines. “The ‘senior surprise’ sign in my front yard was a good gesture that brought me some temporary happiness and feeling of Emery love,” senior Jadyn Grossman explained.

Director of Student Life Brittney Ford and her team went to each senior’s home to put up signs in front yards showing their love and support. Moreover, Head of Upper School Nathan Barber emailed all seniors and offered to deliver lunch to every senior’s home, in place of the senior lunch privileges.

“Nothing could ever fully compensate for what we’ve lost, but I think that the administration is doing the most they can, and I do believe that they’re thinking of us. Mr. Barber’s lunch proposal and Mrs. Ford’s Senior Spotlights, as well as the yard signs, just go to show that. Not all schools are extending this level of empathy,” Zehavi said.